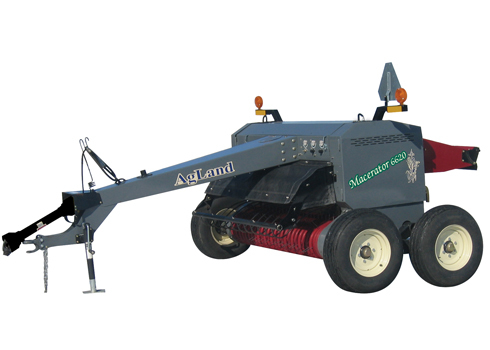 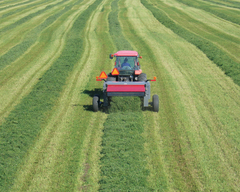 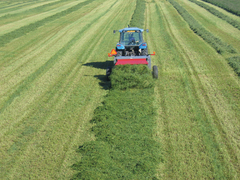 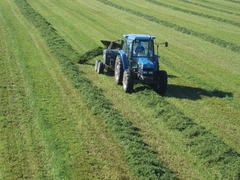 More thorough than a conditioner
The Agland Macerator features a double set of rolls, allowing it to do a more thorough job than any other system on the market. The pickup reel feeds the crop to the rubber intake rolls where the swath is flattened out before it is fed through the steel patterned rolls. The air pressure system helps maintain an even pressure on the rolls without crushing the hay.

Faster drying
Maceration takes place between the steel rolls. The top steel roll runs at a slightly different speed than the bottom roll. This action cracks and nicks the stems of the plants and removes some of the wax, resulting in cell rupture. This allows the moisture to escape at a quicker rate than with conventional equipment, promoting a much faster dry down.

More palatable
Maceration helps to soften the hay, preserves the protein content and exposes more plant sugar to allow more efficient silage fermentation, making all of the hay more palatable and increasing the digestibility of the hay or forage, which may translate* into:

*Depending on condition and type of animal. For more detailed information on the benefits of maceration contact us for a summary of the Prairie Agricultural Machinery Institute (PAMI) test results.

A considerable amount of research has gone into the benifits of macerated hay. The following are a few excerpts of various reports.

"Laboratory tests showed a drying rate for macerated material was roughly double that of conditioned material. This fact, coupled with the wider and shallower windrow or mat formed by the Macerator, accounted for a field drying rate of about 4-6 times faster than with a mower conditioner."

"The alfalfa dehy industry found a 43% saving in gas usage for dehydrating crop which had been macerated compared to a conditioned crop."
Source - University of Saskatchewan, Dept. of agricultural and biosource engineering

"A recent feeding experiment with dairy cows in early lactation showed that maceration increased alfalfa dry matter intake and milk production. This increase in hay consumption resulted in a significant increase of milk per day. Milk fat remained the same and protein content was significantly higher."
Source - Savoie and Block

"Researchers have found that the main advantages of forage maceration over conventional mowing conditions are : faster field drying, less fiels losses when there is no rain, improved digestibility of the fibre and more efficient silage fermentation."
Source - Special PAMI report

"Maceration increased in vitro digestibility of alfalfa stems by as much as 39%."
Source - Sirohi et al
Copies of complete rapports are available on demand.

Clarence Thiessen of C.T. Farm in Spanish Lookout is the year round source for quality hay for cattle, horses and sheep. Clarence has evolved a sophisticated and well-managed full time haying operation, which depends upon his knowledge of grasses, soils and equipment utilization. The table on page 21 lists the types of hay available, their nutrient content, average pricing, and suitability for use in cattle, horses and sheep. C.T. Farms has also tested its grasses (where marked with *) for crude protein content. Weight of square bales is between 42 and 50 pounds. Weight of round bales is approximately 900 pounds.

Clarence describes bismoto as a grass midway between star grass which stands up to 24” and Bermuda average height around 10”. It is highly palatable and very appealing to horses due to its soft texture, which is similar to the texture of blue stem. C.T. Farm bales milo and RK straw in the dry season for cattle. Clarence describes these products as ‘survival’ for the dry season. He noted that cattle will generally leave the RK stems and eat only the leaves. He rarely bales straw of black eyed beans, black and kidney beans.

The unique design and suitability to the tropics of the macerator, a machine manufactured in Canada and the only one in Belize, is at the heart of the success of the C.T. Farm haying operation. The tropics, being very humid and with unpredictable rainfall, creates not only a difficult climatic environment to cut and bale grasses but also a financial risk. Once the grass is cut, it must dry before baling, and should there be rain during the days of drying, the entire cut is lost and cannot be baled. In the rainy season, one day extra for drying is required due to moisture in the soil. The macerator reduces the hay loss in the field during the rainy season by eliminating one day from the drying cycle. Traditional baling cycle in the dry season is four days. Grass is cut the first day, sun dried for 2 days, sometimes turned with a rake or swatter, and then baled on the fourth day. When operating with the macerator, within 6 hours of cutting, the operator can make a separate pass, which eliminates the need to rake or turn the drying grass. Another benefit of the macerator is the increased palatability of the product which is especially important in the feeding of horses. After passing through the macerator the grass has softer points, and even though baled greener, it has proper moisture content required for baling. There is a marked difference in the color and texture of the grass harvested with use of macerator compared to a bale harvested conventionally. The reduced drying time and the softer texture of the hay are accomplished by the ingenious design of the macerator. The grass is passed through two opposing aluminum rollers, the tension of which can be adjusted for the type of plant matter, that turn at different rpm. The rollers crack the stem of the grass and lay it open, allowing the stem to dry at the same rate as the leaves. This is how the drying period is reduced by one day, which, in turn, results in preserving a higher level of nutrients in the grass.

Another piece of equipment that allows for a one-man operation, thereby increasing C.T. Farm’s profitability, is the accumulator, which trails the baler and automatically stakes up to 15 bales in the field for later pickup by tractor and wagon. C.T. Farm estimates that they are baling approximately 60 acres each of star and blue stem, 50 acres of milo and 50 acres of humidicola currently. Their annual production is running approximately 3000 bales of blue stem, 6000 bales of star and an additional 3000 bales of bismoto. Mombasa is sold primarily in round bales, and the production is highly dependent on weather conditions which drive the demand by the local cattle and dairy farmers for supplemental hay.

Generally 4 cuts a year are taken from a given pasture. Cutting is done every 2 months in the wet season and every 4 months in dry season. Wet season yields twice the number of bales as the dry season. Bales in the dry season tend to be of lesser quality as they are less homogeneous with some weeds and native grasses mixed in. Clarence states that if buyers understood the grass cycle from wet to dry season, they might better accept the seasonal change in quality. Demand is frequently higher in the dry season but supply is greatest in wet season; so C.T. Farm stores hay to adequately supply customers. Management is a key component to quality. Too many cuts leave the grass too low, encouraging undesirable weeds. However, recovery under 6 weeks produces the better quality grass. These two considerations need to be balanced in deciding when to cut.

Clarence stated that he does not apply chemical fertilizers, pesticides or herbicides. With proper management of cutting cycles, herbicides are not needed. Occasionally he has applied manure to a field for soil enhancement.

While C.T. Farm bales for resale, another farmer, Eddie Friesen, does custom baling. He provides equipment and services to cut, rake and bale your grass. He has an hourly rate for cutting and a per bale rate to bale. Eddie bales all grasses, stocks and straws. Once completed, you can transport the bales to your barn, or Eddie may sell them for you to retail customers.
Written by Maruja Vargas
Clarance Thiessen and Eddie Friesen, C.T. Farm, Spanish Lookout

Design and specifications subject to change without notice.